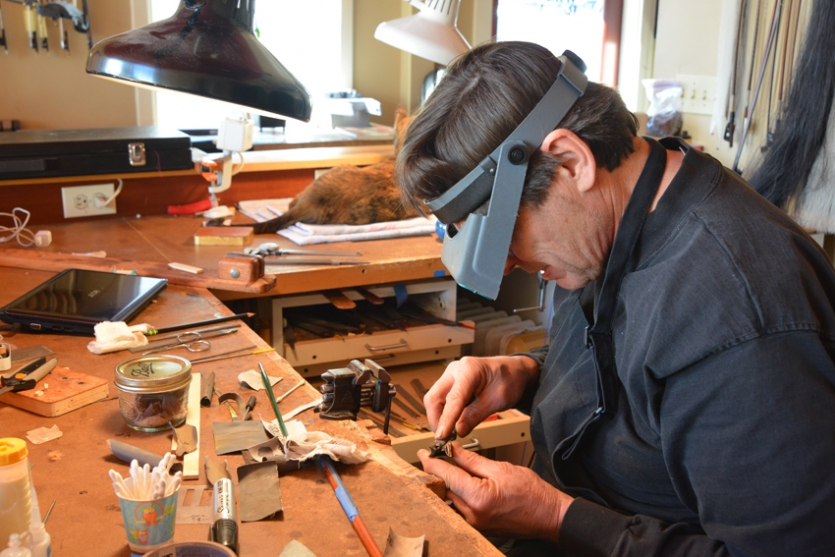 Not everyone is capable of restoring a historically significant bow because it requires understanding of how the maker works; the tracks of the tools; just the whole signature of the maker. And so, to have someone who doesn't fully understand that work on a bow like that is potentially going to destroy the character and value of the bow. So it's very important that anyone who works on the bow has a full knowledge of the maker that he's working with. So you're kind of working side by side with the original maker. That's really a cool thing.

Bow repairs are also done on an appointment basis. They are of the highest quality but, unlike restorations, are by nature simpler and usually require much less time to bring a bow back into service. Repairs include screw and eyelet replacements, tip plates, grips, thumb leathers, pins, pearl slides and eyes, bending improvements, broken bows... to name just a few services provided.

A very worn Peccatte frog with a bad cheval and cracked tongue. I did a full tongue graft on this one that goes all the way into the mortise. The repair is strong as new and the ferrule seats firmly on the newly formed wings. The cheval was replaced with wood that more closely matches the original wood, and after replacing all the shell parts the effect is beautiful. It looks very good for having had major reconstruction.

The frog was missing the nickel underslide. I made a new slide using MOP and ebony slats to closely match the character of what the maker originally made for this type of frog.

Tourte Frog and Button Copy for a stick that was missing these pieces. I thought it came out nice too.